Vision impairment and eye disease are major global health concerns and have been associated with increased morbidity and mortality, and lower quality of life.

The human eye is an incredibly complex organ comprised of multiple tissue types, layers, and parts. All must work perfectly in synch and be constantly maintained. But the problem with any complex system is that there are far more things that can break down or go wrong.

By the time we reach middle age, our eyes have spent more than one billion seconds bombarded by sunlight, artificial light, computer/smart device screens, pollution, allergens and foreign bodies. Then there are the insults from strain, fatigue, chronic sleep deficit, nutritional deficiencies, and disease.

The human eye is an incredibly complex organ, one of the most damaging assaults to our eyes derives from oxidative stress

One of the most damaging assaults to our eyes derives from oxidative stress. This includes damage to cellular DNA and cellular bodies that is caused by molecules known as reactive oxygen species (ROS), also called “free radicals.”

The eye is particularly vulnerable to oxidative stress due to its exposure to light, its rich content of mitochondria, and the high metabolic rate of photoreceptors1.

The good news: Antioxidants are a first-line defence against the attack on our eyes.

Among the antioxidant ingredients that are especially effective for protecting our eyes from the damages caused by direct insult and oxidative stress are those called carotenoids. These are lipid-soluble classes of organic compounds that act as pigments (ranging from yellow to red) in the cells of plants and animals. Carotenoids are produced by plants, algae, and fungi, and bacteria.

Astaxanthin is a powerful antioxidant — in fact, it is one of the most powerful natural antioxidants known. It crosses the retinal blood barrier and protect the eyes from oxidative stress.

Astaxanthin offers unique protection for the eye as one of the more efficient antioxidant compounds it neutralizes the oxygen radical molecules. Astaxanthin works with other vision health-supporting carotenoids, especially lutein and zeaxanthin2.

Astaxanthin has been shown to help trigger natural defence proteins that support other antioxidant compounds and aid in detoxification. It attenuates molecules that signal inflammatory triggers, thus acting as an anti-inflammatory agent, and it increases ocular blood flow velocity, allowing the blood to reoxygenate the tissues of the retina and eyeball and clear out toxins and waste more efficiently.

Astaxanthin offers unique protection for the eye in combination with the other carotenoids, providing stronger light absorption across broader wavelengths than other carotenoids. In fact, a number of studies support astaxanthin’s ability to protect the retinas from light-induced damage and suggest a carotenoid complex that includes astaxanthin could protect the eyes from damage across the entire solar spectrum3.

As people get older, they are more prone to develop some form of the vision-impairing eye condition. The four major age-related eye diseases that affect seniors include glaucoma, cataracts, age macular degeneration (AMD), and diabetic retinopathy.

The anti-oxidants and anti-inflammatory activities of astaxanthin may support the prevention or alleviation of symptoms of age-related eye diseases.

Cataracts are cloudy areas that develop in the lens of the eye leading to a decrease in vision. The condition is highly prevalent in aging populations and includes about 35-50% of people aged 75 years or more.

In a Japanese study of 35 patients undergoing cataract surgery, two weeks of astaxanthin intake at 6mg per day boosted superoxide scavenging activity while suppressing the production of cell-damaging compounds called hydroperoxides in the aqueous humor of the eye. These results suggest that astaxanthin can inhibit the development or onset of multiple oxidative stress-related diseases such as those described above. 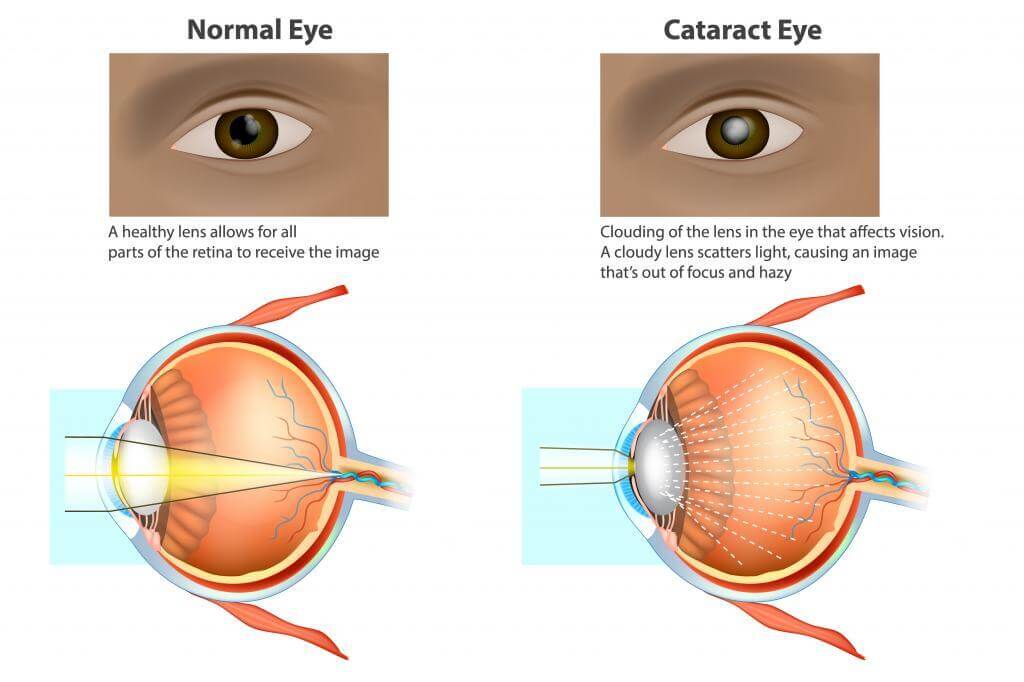 Cataracts are a clouding of the lens. Medical illustration of a normal eye and an eye with a cataract, clouded lens

Age macular degeneration (AMD) is a progressive disorder affecting the central part of the retina, the macula. AMD caused by oxidative stress, mitochondrial dysfunction and inflammatory processes. The imbalance between the production of damaged cellular components and degradation leads to the accumulation of harmful molecules.

Glaucoma is a progressive condition that damage the eyes’ optic nerve. The cause of glaucoma generally is a failure of the eye to maintain an appropriate balance between the amount of internal fluid produced and the amount that drains away. High eye pressure just keeps building and pushing against the optic nerve until nerve fibers permanently damaged and vision is lost. 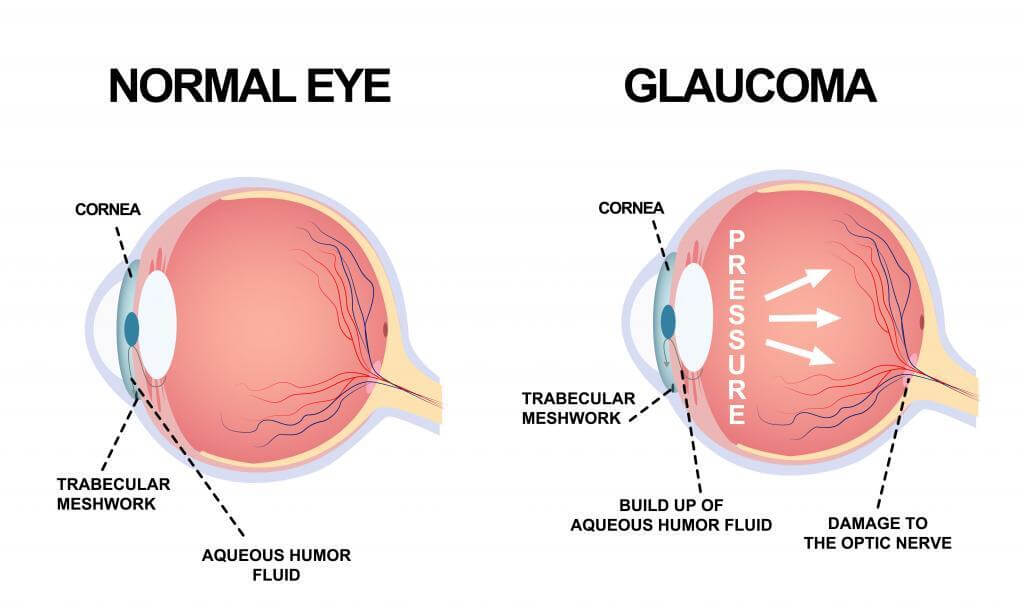 Diabetic retinopathy (DR) is one of the major microvascular complications of diabetes and the most frequent cause of acquired blindness in adults. The formation and accumulation glycation end products (AGEs) is a key pathophysiological process involved in diabetic retinopathy .

The protective effect of astaxanthin on DR was shown in several studies. In a study with cultured human retinal pigment epithelial cells Astaxanthin exhibited significant inhibitory effects on the formation of AGEs, ROS, lipid peroxidation and blood vessels formation stimulators9.

AstaPure is a derived from Haematococcus pluvialis microalgae, the richest known source of natural astaxanthin. Solabia-Algatech Nutrition’s proprietary technology is produced in an completely enclosed, environmentally friendly system, fully controlled and exposed to the natural sunlight of the Israeli Arava desert which stimulates the microalgae to produce high levels of active compounds. It is a non-GMO, clean-label, sustainable, minimally processed ingredient

A preclinical study shows that AstaPure reaches the plasma and crosses both the blood-brain and the blood-retina barriers, hence readily reaches the brain and eyes.

AstaPure natural astaxanthin allows formulators to create and market natural, highly bioavailable products for eyes and cognitive health as well as brain health that will help them differentiate themselves in the better-for-you marketplace.

5- M. Santocono, Influence of astaxanthin, zeaxanthin and lutein on DNA damage and repair in UVA-irradiated cells; Journal of Photochemistry and Photobiology; 2006 Dec 1;85(3):205-15.